On Saturday 1st April, the radio operators were kept busy in the Point Clare radio room. During the morning there were around 9 ‘transit’ logons of vessels heading north to Newcastle for a yacht race from Newcastle to Port Stephens.

At around 1640 the radio operators received a call from the skipper of a Bayliner. The skipper reported that he had a flat battery and requested a jump start, the vessel was at Wagstaffe and was needing to head to Blackwall channel.

Skipper Al Howes and his crew Peter Fischer, Karl Leipa and Duncan Coles were soon on their way on board CC21. The crew found the vessel and gave them a jump start, the skipper and the 8 people on board the vessel in distress were quite relieved. CC21 returned to the Point Clare base arriving back at around 1730, which gave the crew plenty of time to close the boat and leave the base at 1800 (on time).

Sunday the 2nd April started early for the duty boat crew, with most members arriving early possibly due to daylight savings ending. At around 0555 the radio operators received a phone call from the skipper of a yacht that had taken refuge at Patonga overnight. It was reported that the skipper of the yacht had been on the deck during the evening and taken a fall, he believed that he may have cracked some ribs in the process.

CC21 was tasked for the job with Jim Robertson in command, Paul Hanlon and Peter Fischer as his crew, they were soon headed to Patonga in what they thought would be a medivac situation. Once CC21 arrived on scene they found out that there were four people in total on board the yacht. The gentleman that had called for assistance as well as his daughter (who has had experience in the Sydney to Hobart yacht race) and her two daughters. 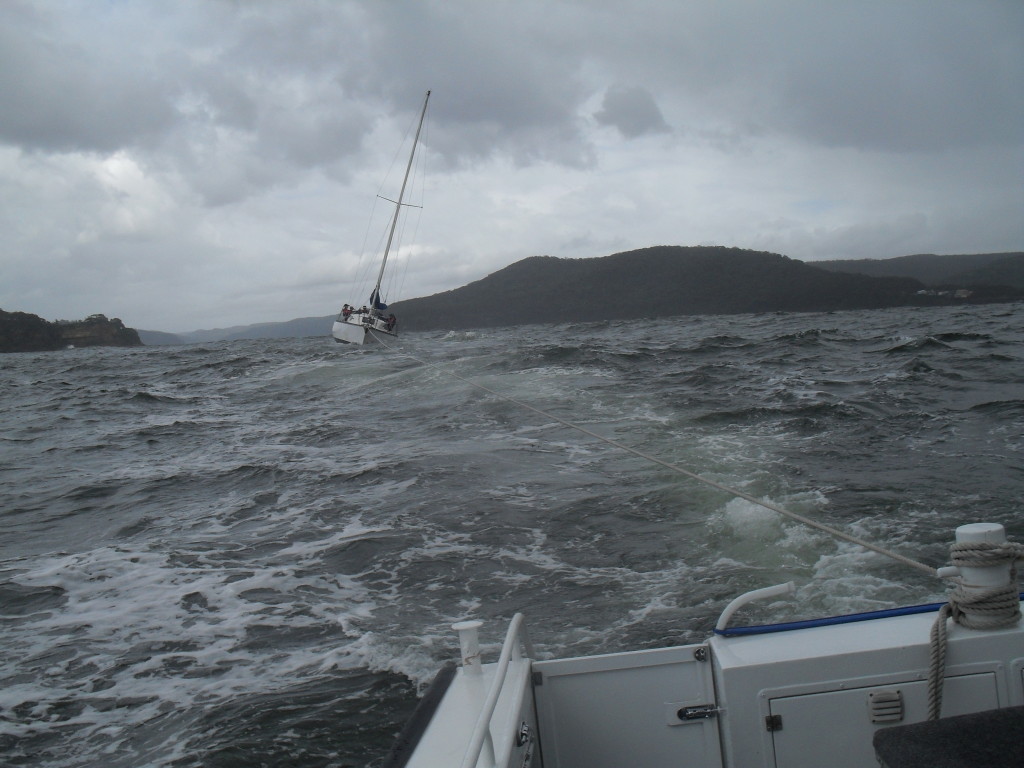 The slow and rough ride back for both vessels

Whilst the crew of CC21 were towing the yacht back to Booker Bay, CC22 with Al Howes Skipper, Karl Leipa and Garry Owens as crew were tasked with towing a 6m tinny off the mud in Paddy’s channel which they successfully completed then returned to base. The crew on board CC21 were very relieved once arriving back to base at 1230 (just in time to sit down to a well earnt lunch